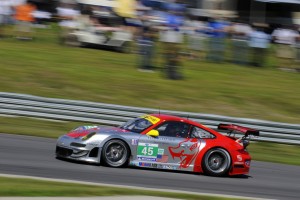 Flying Lizard Motorsports announced today the entry of the No. 45 Porsche 911 GT3 Cup in GT for the 2012 Rolex 24 At Daytona, January 28-29. The No. 45 will be run in conjunction with Wright Motorsports.
The driver lineup is Joerg Bergmeister (Germany), Patrick Long (USA), Mike Rockenfeller (Germany), and Seth Neiman (USA). Bergmeister and Long are Porsche factory drivers and co-drivers of the team’s No. 45 Porsche in the American Le Mans Series. Rockenfeller has been an Audi Factory driver since 2007; this will be his first race with the Lizards since the 2004 Rolex 24, in which he finished second in GT in the No. 74 Porsche. Neiman is Flying Lizard team principal and drives the team’s No. 44 ALMS Porsche.
Read the rest at 9magazine.com