As we enjoy the warm and sunny Central Oregon summer, along with the pleasures of friendships and driving our Porsches over winding back roads, I thought I would share the story of my December, 2009 Zuffenhausen Adventure.
Porsche – It’s not just the cars, it’s the people!
Everything begins with an idea!  It all began when I was planning a business trip to Germany, and decided to take the opportunity to visit the Porsche factory and museum.
Arriving in Germany
My work was in Herborn, which is 90 km northwest of Frankfurt.  Now, Herborn is a small and wonderful village (population 22,000) located in the Dill River Valley amongst the wooded hills of west-central Germany.  This area and village date approximately back to the year 1098.  Quickly doing the math, 2009 minus 1098 = 911, hmmm… 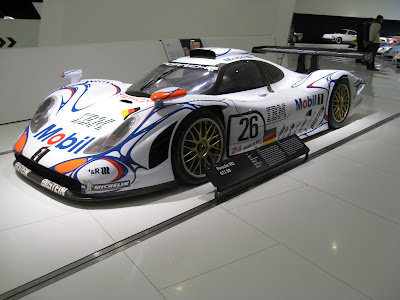 An Interesting start…
I had Tuesday free, and with 289 km to drive, I left the hotel at 5:00 AM, entering  Zuffenhausen, Porscheplatz into the GPS as my destination.  It’s raining hard, and I mentally praise GPS technology as I head out into the dark morning.  About 10 minutes into the drive, there it is… a barricade across the road… road closed!   I head back to my starting point and begin all over again, this time taking a back road to a village I had visited on the previous Sunday.  Once there, re-entering  Zuffenhausen, Porscheplatz  back into the GPS, and  I’m on my way.
Now, heading south on the autobahn (A5), there is a continuous caravan of tractor-trailer rigs in the right lane, with cars edging along at 100 km/hr in the left lane contending with the driving rain, spray from the trucks and the guard rails to the left.  And then I saw it riding on a flatbed trailer, facing aft towards me, a black 356 Speedster. From then on, life was good, dawn broke, the rain subsided and traffic eased into a fairly steady 140 km/h pace. 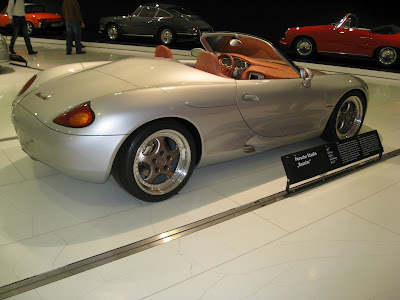 Arriving at Zuffenhausen
The GPS took me to the off ramp for Zuffenhausen and in a few minutes there it was…Porscheplatz.  And since I had arrived about an hour early, it gave me an opportunity to visit the on-site Porsche dealer.  The dealership has three inside parking levels and on the second level were the “dream” cars: four GT3RS’s, a couple of Turbos and a Carrera GT. 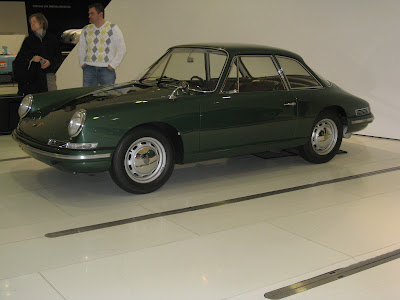 The Factory Tour
The factory tour focused on final assembly, upholstery and engine shops (no cameras allowed).  911s and Boxsters were both assembled on the same line and are the only Porsches assembled at Zuffenhausen.  The body shop is in a different building, separated by a very busy street, so the completed bodies (unpainted) move across a glass walled sky bridge (about three stories in the air) connecting the two.  Standing outside and looking up, you can see a line of Porsche bodies moving slowly across (like a row of ducks).
Once the body is painted, it arrives at the final assembly interior area, and is placed on a moving platform (rate of 1 meter/minute), the doors removed for interior accessibility, and the hand assembly begins.  A “picking trolley” for each car contains all the correct optional parts, and is brought over from the “supermarket” located in the old Reutter Coachworks building.
As a side note, it is interesting that there is only one robot in this final assembly process, and that robot installs the windshield and rear window; all else is hand assembled.
The Upholstery Shop
Once in the upholstery shop we were greeted with row after row of hanging hides in the standard colors of black, stone grey, sea blue, sand beige, plus terracotta. Each hide is hand and computer digitized/marked for imperfections.  Even a gnat bite on a hide is cause for concern.  The hides are cut to pattern by a water jet and it takes about 20 hides to complete a 911's leather interior, since about 50% to 60% of the leather is scrap. Most of the hides come from Austria.
A Special Treat
As we walked between two buildings, there in a courtyard sat a factory GT3RSR, the blue one “FELBERMAYR,” along with six members of the Porsche Racing Team including, Marc Lieb, Richard Lietz, Timo Bernhard, Romain Dumas, Jorg Bergermeister and Patrick Long.  We stood back as Marc climbed into the GT3RSR and fired it up, talk about needing ear plugs.  Healthy is an understatement!  The Porsche guys also happily signed Porsche Motorsports posters for the group. 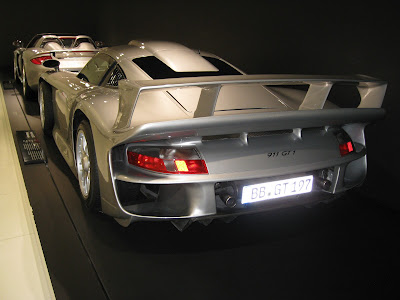 The EngineShop
The last stop was the engine shop, which was pristine beyond compare.  To my understanding, all variations of Porsche engines are assembled here.  Once the engines are assembled, they are filled with oil, run to operating temp, and go through a full test with a recording of 220 parameters.  We were assured that each engine leaving the shop develops the specified BHP or a “bit” more.
On to the Museum
All I can say is, you just had to be there!   But first some nostalgia: I have been fortunate enough  to have visited the “old” Porsche Museum, a few times, the last time was 17 April, 2000.  Now the museum at that time was quite small (like a long wide hallway) as compared to the new one, however always very intriguing.
It’s also interesting how technology has changed our way of life.  When I visited Zuffenhausen in the late 80's, I would spend time standing outside the gated entrance to the factory, watch as the metal gates slid open, as the factory drivers took some of the new 911s out to the streets for a “shake down” drive.  Now there’s a dream job!   I asked if they still do that and the answer was not any more, testing is now automated.  Ah, progress…
The new museum is huge and pristine.  The building is panoramic and breathtaking; it’s open, and bright. The Porsches are the stars!  It has it all… take your pick: nostalgia, racing, technology, original proto types (the 1992 Boxster design study). Can you imagine the 911 not being a fastback? An early prototype wasn’t and then Ferry Porsche intervened (thank you.. thank you), demanding  that the basic profile of the 356 be maintained.
And… vintage race cars: 906 Carrera 6, 908 LH long tail, 917 KH coupe, 936 Spyder, 911 GT1, the 16 cylinder 917 PA Spyder and the 917/20 “pink pig."  The list goes on: the 550 Spyder, 718 Formula 2, 904 Carrera GTS, 909 Bergspyder, the lightweight 935 “baby," 959 Paris-Dakar… 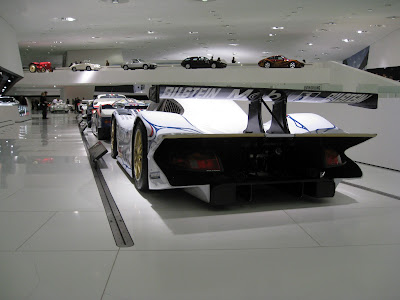 Back to Herborn
Ah… and now back to the enjoyment of driving the autobahn, it’s onto the A81 heading north. It’s so systematic, right lane except to pass and once you have passed quickly move back over!  Success is described as never being flashed by a faster car behind you while you are in the left lane (likely would be a 7 series or a big black Mercedes, maybe an Audi).  Occasionally, there is the thrill of a 911 flying by and quickly disappearing into the darkness.
Heading  Home to Seattle
So, it’s Saturday morning, it’s been a very successful week, both business and pleasure.  I check out of the hotel, load the luggage in the car and am ready to roll.  I’ve got a 11:45 flight to catch so I enter Frankfurt Airport into the GPS and press destination. It calculates and shows the time of arrival as 9:11... Perfect!